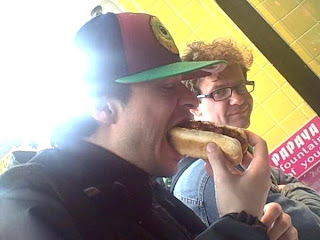 Seattle's Rokhausen was born in New Jersey and got started in music by taking the noises he recorded in his parent's garage and mixing them together using their old computer. That's about all I can find out about him, aside from the fact that he has a track on Motown Meltdown, Volume Two! So, let's focus on the compilation...

Taking advantage of a little known collection of discs which were intended for Karaoke and feature the actual backing tracks heard on more than a few classic Motown records, the Motown Meltdown series is built entirely upon these pilfered godsends.

Each of the source records ("The Motown Master Recordings Karaoke by Singing Machine") contains eight songs by the original artists, with separated stereo channels. On one side you hear the classic Motown hit's instrumental, and on the other the vocal. That is a pretty amazing find for any sound collage artist (not to mention a mashup artist) and the results are all over the place in a very good way. Check out Motown Mashups 2 HERE.

I wish I could tell you more about Rokhausen specifically, but for now just check out his track in Episode 261 of Some Assembly Required. Without further ado, here's the SAR Q&A with Rohausen...

*Are there any additional names used to describe this project: Dijet Bidet Spret, The Flaming K Holes, Bristol Pete: The Human Bassline

*Tape manipulations, digital deconstructions or turntable creations: I use computers!

*What is your creative/artistic background: Data entry

*History: Christ, it's been... 17 years now!? I was about 13 years old when it started. I totally screwed up our family computer trying to get the sound working for some crappy game about dinosaurs. I was told that I'd be grounded until I fixed it. And that's how I really got to know about our computer's sound card and what it can do. Around that time my parents bought me a guitar but I was more content to go out to the garage and bang on things with a tape recorder, then dub it back onto the computer for editing. I was using this application in Windows 3.11 called Pocket Recorder to mix and edit. The results were really awful and a lot of fun. Really awful.

*Born: I was born in a suburb outside of Newark, NJ when Lipps Inc's “Funkytown” was dominating the Billboard charts.

*Motivations: I do it to keep myself amused, busy, and comfortably estranged from most of what's going on in the world around me.

*Philosophy: I once had this American Literature professor who'd hang out at the local bars around town. He almost always showed up late for class, giving some excuse that involved taking his kids to a public pool. He'd sometimes give us assignments that were impossible to complete in a satisfactory manner, while not telling us that he was grading on a generous curve (ie: read Moby Dick and write a ten page paper on it in two days time). During lecture he'd entertain us with long swaths of silence, inexplicably break into the “Happy Birthday” song, and flippantly comment on the quality of his bottled water. All of this drove a lot of his students absolutely bananas. I began catching onto his routine at some point, and while drinking with him in a bar one night I asked him why he played this sadistic game with his students. He stared at the bottles behind the bar and in a tone of utter sincerity he replied, “I wake up every morning, I splash cold water on my face, and I look in the mirror and ask myself... How can I f*** with people today?”

*How would you like to be remembered: As the Mothman.