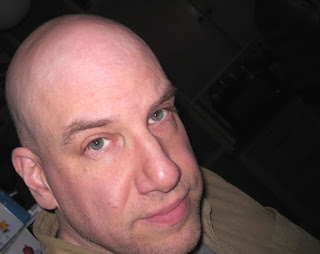 Christopher DeLaurenti is a Washington based composer living in Seattle. He's also a sound artist, performer and music journalist, having writen a column for The Stranger for eight years, as well as essays for publications such as Tablet, The Tentacle and 21st Century Music.

His most recent work, titled Secret Songs Of Your Surroundings is an interactive soundscape, installed on the A Line bus transit corridor in Washington State. There are at least a half dozen collections of his work, much of which is available to download for free at his website. We received 3 Camels For Orchestra several years ago now and played the title piece (all three parts) in Episode 28. Check it out HERE.

Without further ado, here's the SAR Q&A with Christopher DeLaurenti...

*Are there any additional names used to describe this project: Except for collaborations, I use my own name, Christopher DeLaurenti.

*Do you use a pseudonym? I probably should, but even after a few legal hassles over my work, I haven't. I just don't feel enough of a division between living my life and making my art to justify coming up with one.

*Tape manipulations, digital deconstructions or turntable creations: It depends on what I am making; I've made pieces with sine waves, field recordings, ultra-processed sounds, as well as composed for acoustic instruments. Appropriation - of myself, of others - is one way I approach composing. For pieces I make exclusively from commercial recordings, I like John Oswald's term plunderphonics.

*What is your creative/artistic background: I come from long line of musicians. I've been creating with sound since I was a kid in the 1970s and composing with commercial recordings since the late 1980s by splicing bits and fragments of songs I like together.

*History: My first album, "Three Camels for Orchestra," was released in 1995.

*Motivations: I love to listen. I make things I want to hear again.

*Philosophy: I could go on about this for hours, so I'll just address appropriation: When I create, I'm not only sharing sound but how I listen. Since listeners stand a greater chance of already having heard a commercial, more or less popular recording, my plunderphonics not only reveal how I listen but do so more transparently than anything else I make.

*How would you like to be remembered: As someone who made and found interesting things for the ears!