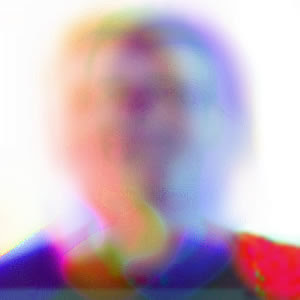 Los Kinkos is Portland's Michael Sean. His back story reads like so many notable sound collage artists, and how they started out. I especially responded to the story about his dual cassette deck's meticulous pause buttons. I wore mine out actually, back in the day, with all of the pause button edits (and re-edits). I'd purchased some kind of insurance plan and had it refurbished at least three times... money well spent, in the years before digital audio workstations.

Sean spent the 90's working on a variety of creative projects. He played in a rock band, did some time in college radio and produced a zine for a few years before getting into sample-based production. He started work as Los Kinkos around 2004 and it looks like he's released about four albums. There's sure to be more about Los Kinkos online in the years to come. In the near future, look for one of his tracks on our 50/50 compilation.

Check out his myspace page HERE. Without further ado, here's the SAR Q&A with Los Kinkos...

*Do you use a pseudonym? Yes, Los Kinkos is not my real name

*Members: Just me, technically, and a cast of thousands, technologically.

*Another genre descriptor: I'm still hoping to find a good name for this stuff. While I dig the cleverness of terms like "Plagiarhythm" and "Plunderphonics," it's disappointing to see so much focus on the illegal aspect of sampling. Plagiarism, plundering, bootlegs -- these word associations make it too easy for people to lump it in with piracy. In the 90's, when people were getting sued left and right, such wordplay had a rebellious nature. But the mainstream has finally caught up, and the climate for sample-based creations has greatly improved (I mean, Girl Talk was in an ad for Microsoft, of all things). Such terminology seems kind of self-defeating now. I think it holds back the really good stuff from being treated as music, or possibly even art, rather than just a prank or outright thievery.

*Original Location: I grew up in the heart of the Heartland (Iowa)

*What is your creative/artistic background: I've made mixtapes since I can remember, both for myself and for friends. I grew up with those crappy all-in-one shelf systems, and I used to have one with the most precise pause button. It left no clicks or spaces and allowed me to butt songs right up next to each other. I used up every inch of the audiocassette. In between 'proper' songs would be movie dialogue, quick excerpts from comedy records, bits from instructional tapes, short skits, and anything else I could run through that tape deck. It was a wonderful primer for the basics of sound collage.

One day I discovered that, unlike most dual cassette decks, you could play both tape decks at the same time and they'd come through the speakers together. This was years before I had access to (or even knew about) mixers or 4-tracks or computers, so it was a revelation. It opened me up to the possibilities of layering sounds. I used to play a music tape on the left, and something else on the right, like a sound effects tape, a stand-up comedy album, or an instrumental movie score. A lot of times it was nonsense, but when the juxtapositions clicked it was fantastic.

I was briefly in an alternative rock band during high school (circa 1991), and did a few stints in both college and pirate radio (1992-96). I produced a cut-and-paste/poetry zine for a few years (1994-97), and then got into the lo-fi bedroom 4-track thing (1996-2000). It was around this same period that I began toying with sampling. Early attempts were done with the classic tape deck to tape deck method, slowly building loops and layering them. I also frequently employed the Casio SK-1 keyboard, which allowed you to sample a second or two of audio from either a built-in mic or a line level input.

These experiments soon graduated to the computer, although they were still quite limited by the technology of the mid-1990s. The ever-expanding web of the internet provided an endless supply of research, discovery, and inspiration. The explosion of mash-up culture around the turn of the millenium only added to the fire that was being lit under my ass. It wasn't long before I procured some decent sound editing software and began trying my hand at completely sample-based music. In 2004, I began working on the material that would become Los Kinkos.

*History: I've been doing sample-based music as Los Kinkos since about 2004, working off and on whenever free time allowed. Mostly I was sketching out concepts, testing ideas, and amassing and cataloging samples for eventual use. It's just in the last two years or so that I've really started to produce what I consider finished tracks.

*Motivations: I love the possibilities of sampling, and I love the spectrum of styles represented on a program like Some Assembly Required. I hear lots of stuff that inspires me, and I also hear stuff that frustrates me. Both aspects motivate me to create something myself. In the end, I'm trying to make the sort of thing that I always wanted to hear.

*Philosophy: I'd say my overall vision is to do work that finds a happy medium between the beat-driven mixes of Steinski and the less danceable collages of John Oswald, while retaining the sense of humor found in both. I'd also like to contribute to the idea of sampling as an art and not just a derivative production shortcut. As Jean Luc Godard said, "It’s not where you take things from, it’s where you take them to."

*How would you like to be remembered: With a smile.


www.some-assembly-required.net
Posted by Jon Nelson at 7:21 AM