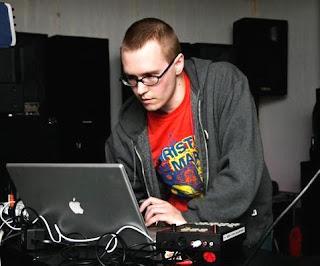 Timmy The Tapeworm is the Twin Cities' own James Allen. Check out his :50 track on the SAR/mnartists compilation "50/50", featured in Episode 256. It's a stand out.

Allen is a recent graduate of the The Art Institutes International Minnesota, a noise artist and freelance Graphic Designer, living in Minneapolis. His work has been featured on at least a dozen compilations, including 2008's 612noise, on the insides music label.

Without further ado, here's the SAR Q&A with Timmy The Tapeworm...

*Are there any additional names used to describe this project: Depeche Node, Japeworm

*Members: One, with the occasional tapeworm.

*Tape manipulations, digital deconstructions or turntable creations: All of the above, but often not. Or, perhaps more.

*Another genre descriptor: Most of my work can probably be described under terms like mash-up, breakcore, or noise. But then there's the work that's not quite any of those that I often refer to as DnB for those with attention disorders, or ADHDnB, for short. However, when I'm too lazy to explain anything, I just say it's Wormcore, and leave it up to whoever to figure it out.

*Is there a story behind your name? I was convinced that I had a tapeworm living in me during the summer of 2005. It was a lonely summer, so, excited to have company, I became rather fond of having a tapeworm. He became my friend. I later found out that I never had a tapeworm, just a high metabolism.

*What is your creative/artistic background: In short: I went to school for Graphic Design. I use that knowledge for the occasional freelance. I do the occasional art show thing. More often than not, the music thing works out better. It's also more fun.

*Motivations: Making tangible versions of the sounds in my head and other bad cliches.

*Philosophy: There isn't a set "philosophy" behind my work, it's more a means of keeping myself from having a nervous breakdown.

*How would you like to be remembered: I am still uncertain.